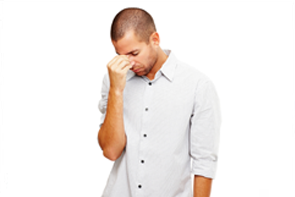 Stress and worry were really getting Shane down

After the first minute of our first counselling session I recognised that Shane was seriously unhappy. Although he greeted me in a cheerful voice and with smiling lips, his eyes and body language told a different story.

Shane has a job he enjoys, with good prospects for advancement, and a girlfriend he loves and who loves him – apparently every reason to feel on top of the world. Yet he suffers from severe sleep deprivation due to worrying about every aspect of his life.

Until our counselling sessions Shane told me the worries that kept him awake at night included:

Shane was desperate for help and was willing to explore the causes of his anxiety and to make any changes that would help.

As he began to explore and remember how and when this habit of worrying began, Shane started to see some patterns that started way back when he was a very young child – patterns of beliefs that lead to anxious behaviour in an attempt to change some family issues over which he had no control as a very young child.

Of course, recognising the source of a belief or habit can launch the healing process, but Shane also needed new tools and strategies to help him create new beliefs and behaviours.

Tools to release anxiety and worry

For obvious reasons I can’t go into all the details, but suffice to say that in our counselling sessions I was able to provide Shane with several tools to release anxiety and some strategies for challenging the false beliefs he held about himself and his capabilities – at work and in his personal relationships.

Here’s what Shane said after counselling to manage anxiety

After my counselling sessions with Peter I feel a lot calmer. Little things no longer worry me and stress me out. Peter gave me a ton of new tools to work with and I was even able to let go of the issues I had with my father and my sister. – Shane, Traralgon

When I see him now, I am delighted to report that Shane’s cheerful voice and smiling lips are matched by his bright eyes and positive posture.